Whether it be boy or girl, pink or blue, some couples just have their heart set on conceiving a specific gender. Some couples want to round out their family in a specific way, say, 2 boys and 2 girls. Claim Your 20 Free Pregnancy Tests – Click Here

Some couples might already have a house full of boys, and want to add some ribbons and bows to their life, or vice versa. Some couples might have always dreamed of a baby girl and that’s all, or just a single baby boy to fulfill their dreams.

However, in the past, having a baby boy or a girl was just simply up to chance and fate. Luckily, in this day and age, there are tons of different “tricks” that couples can do to “sway” their baby’s gender to one sex or the other. There are also several different medical procedures that can be done to influence or help choose baby gender.

Read on for the most helpful tips on how to conceive a specific gender.

Timing Intercourse To Get The Gender You Want

One of the easiest things that couples can do is based on the timing of their sexual intercourse to try to sway the gender of their baby. To do this, women will definitely need to be tracking their ovulation in order to get the timing right, so they can know for sure when their fertile days are. So it is super important for women to be tracking their ovulation if they are going to try to use this method of gender determination. 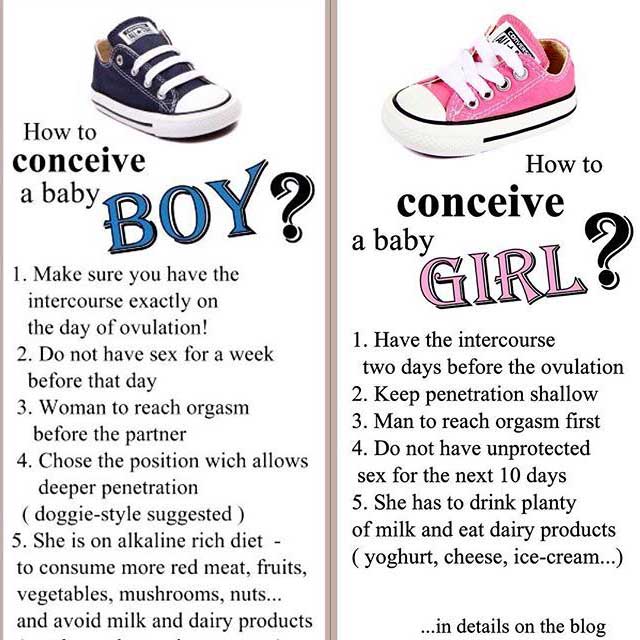 The way it works is like this: in order for the best chances of having a girl, couples need to plan to have sex a few days before ovulation day, and then no sex at all after the time of ovulation. This will ensure that the sperm is ready and waiting for the time that the egg is released. The theory behind this is that “girl sperm” are stronger and live longer than “boy sperm”, so they can last a few days waiting for the egg to be released.

On the other hand, boy sperm are fast swimmers, but don’t live nearly as long. To conceive a boy, couples should plan on having sex on ovulation day only, and not at all before. This will give those fast swimming boy sperm an advantage when trying to conceive.

TIP #1: So, to recap, for having a girl, have sex before ovulation, and to have a boy, have sex only on ovulation day.

Some people believe that the diet that a woman eats while she is trying to conceive will actually help to determine the gender of the baby that is conceived. This one might be a wives’ tale, but it is grounded in a little bit of truth.

For conceiving a boy, this means salty foods like potato chips, olives and popcorn. Women who want to become moms of boys should also eat a lot of red meat. It’s also a good idea to include plenty of foods that are high in potassium, like apples, potatoes, tomatoes, bananas, and mushrooms. 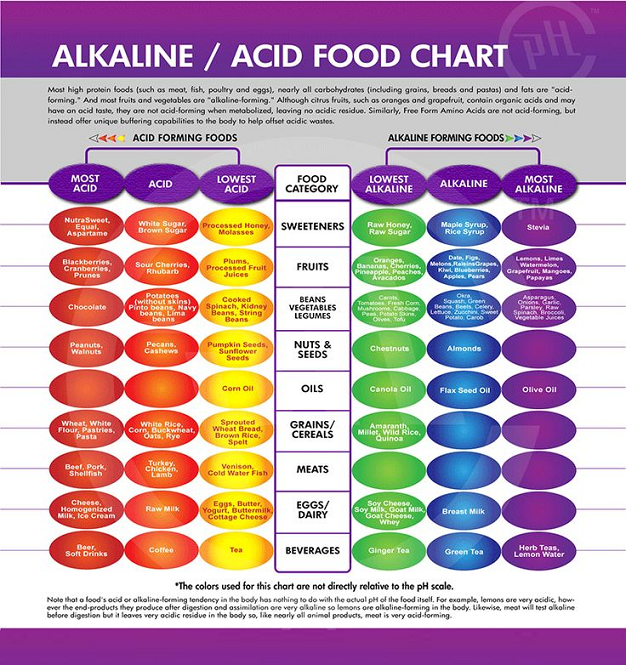 For women who have a girl on the brain, it’s a good idea to eat an overall more healthy diet, however, some sweets thrown in here and there are also supposed to be good for conceiving a girl.

For having a baby girl, it’s a good idea to eat plenty of foods that are high in calcium and magnesium both. This just so happens to include lots of healthy foods such as whole fat dairy products, eggs, chicken, turkey, oatmeal, oranges and lots of different seeds and nuts. Chocolate, the darker the better, is also said to help women who want to conceive a baby girl!

TIP  #2: So, to recap, for having a girl, eat healthy with some sweets, and to have a boy, eat salty foods and red meat.

To Orgasm Or Not?

For example, shallow penetration often has a better chance of bringing about a girl. This means positions like standing sex or missionary, where there is not much deep penetration.

It is also a good idea for women to skip the orgasm when having sex to conceive a girl, since the contractions of the vagina can “suck up” the sperm, which is more likely to lead to a boy.

For women who do want a boy, the advice is pretty much the opposite. Have sex that allows for the deepest penetration possible, such as sex in “woman on top” or from behind in “doggy style” position. This will allow the sperm to be deposited as close to the cervix as possible and make it more likely to conceive a baby boy.

Also, women who are wanting to conceive a baby boy should always orgasm during sex, since the contractions from an orgasm can help the fast swimming boy sperm to reach the egg sooner.

TIP #3: So, to recap, for having a girl, use shallow positions and don’t orgasm, and to have a boy, deep penetration positions and orgasms.

Coffee or No Coffee?

There are also some wives’ tales when it comes to caffeine use and conceiving a certain gender. For example, women who want to conceive a girl are usually advised to stay away from caffeine during trying to conceive.

Now, caffeine usually isn’t recommended for women who are trying to conceive, but women who want to conceive a baby boy might want to opt for just a little tiny bit of caffeine to give themselves a boost. 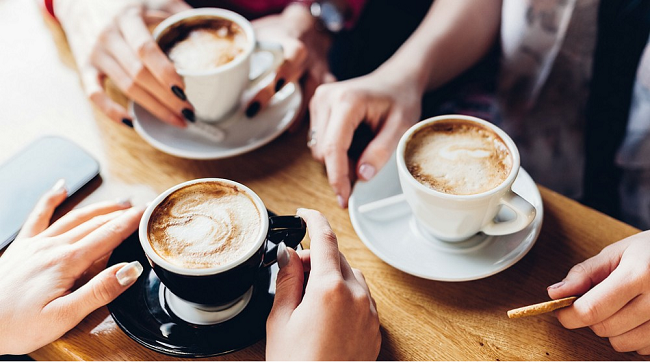 When it comes to men, they can get in on the caffeine action as well. Well, if they want to conceive a boy, that is! If men drink a cup of coffee shortly before sex, it can give their already fast swimming boy sperm a boost, and can increase the chances of conceiving a boy.

TIP #4: So, to recap, for having a girl, no caffeine, and to have a boy, give yourself and your man a boost of caffeine.

Another fun and sometimes very useful way to predict baby gender is the Chinese Gender Prediction Calendar. To use this calendar, you simply bring up the calendar for the year that you are trying to conceive in. Then, you take the age of the mother at the time of conception, and it will have a corresponding month by month chart to show whether the baby will be a boy or a girl depending on the month in which it is conceived.

For example, looking at the calendar for 2018, if a woman is 25 years old, this is what the Chinese Gender Prediction calendar says for her. Conceiving in the months of March, May, July, September, November and December will result in a boy.

To have a girl during this year, a woman will need to conceive January, February, April, June, August, or October.

You can look online to find the Chinese Gender Predictor Calendar and you can find one for every year, and every age of woman to determine what gender a baby may be. Now, of course, this isn’t a very scientific method, but many women swear by it and say that it really does work!

TIP #5: So, to recap, check the Chinese Gender Predictor Calendar to find out your age and what months to conceive. 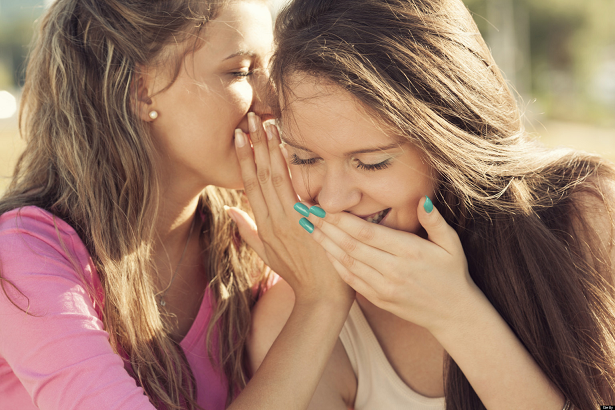 To Conceive A Boy

Some of the most popular and crazy wives tales out there come to having a baby boy.

• For example, one wives tale says that women should lay down for a few minutes after sex to allow the boy sperm to beat the girl sperm to the egg.

• Also, if the man is the one who seduces the woman, it’s said to be a baby boy that will be conceived.

• Having sex at night, or when there is a quarter moon in the sky, is supposed to make it more likely to have a baby boy.

• If you make love on the odd days of the month, or make sure that a woman’s head is pointing north during sex, you will supposedly have a baby boy.

TIP #6: So, to recap, for having a boy, lay down after sex, have sex at night with a quarter moon in the sky, on odd days of the month, make sure your head is pointing north during sex, and let your man seduce you.

To Conceive A Girl

There are also some things that a couple can do in order to up their chances of conceiving a baby girl.

• For example, wives tales say that having sex in the morning or afternoon can guarantee a girl, as well as having sex during a full moon.

• If you have sex on the even days of the month, it’s also more likely that a baby girl will be conceived.

• When it comes to seduction, if a woman is the one who initiates sex, the baby will more than likely be a baby girl.

TIP #7: So, to recap, for having a girl, have sex in the morning, during a full moon, on even days of the month, and seduce your man.

There have been some substantial strides made in recent years when it comes to using science to determine baby gender. Now, pretty much any couple who can afford it can get these treatments and have either gender of baby that they want. 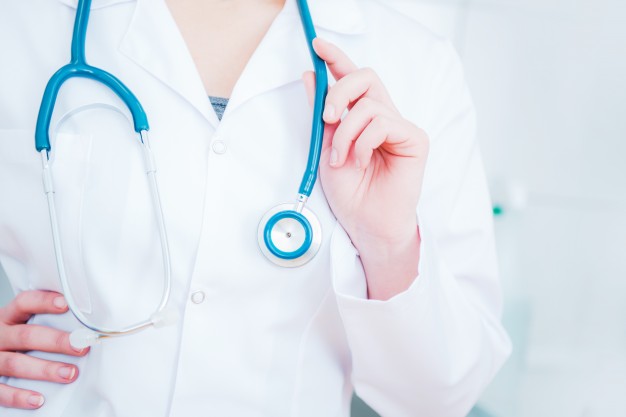 Read on for some more information about the most popular scientific techniques to determine baby gender.

This can help to give couples a better chance of conceiving either a boy or a girl. Many experts believe that this method is not as good at determining gender as it was once thought, but it is still a pretty good method for couples who want to give gender selection a try. This method is also one of very few gender determination methods that is available in the US.

One of the most common and popular procedures done to determine baby gender is a process called MicroSort. The MicroSort process separates the boy and girl sperm through the differences in their DNA. MicroSort is then used along with either IUI or IVF to give couples the best chance of conceiving their preferred sex. 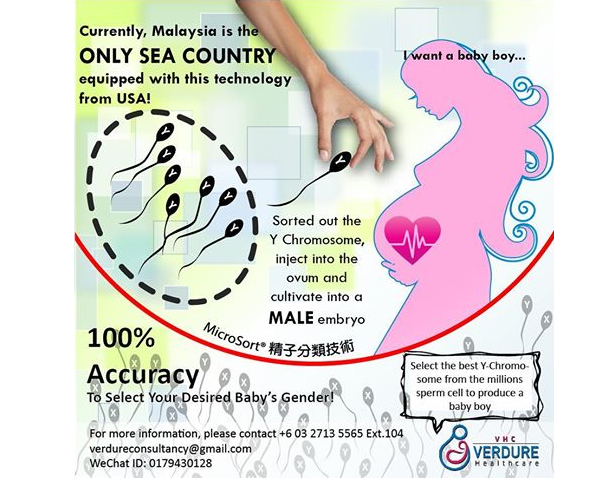 This method has not been around for very long, and hasn’t been available in the USA for very long, but it is definitely gaining in popularity. Definitely keep an eye out for this method of gender determination in the future, as we are sure it is going to continue to gain popularity as time goes on and more and more couples are able to access it as a potential option.

In conclusion, you can see that there are tons of different ways for couples to try to have a specific gender of baby. Whether couples want to track ovulation and manage their sexual positions, and try to sway their babies gender that way, or if they want to play around with one of the very wacky and crazy old wives’ tales that exists when it comes to gender determination.

Couples can also use one of the more expensive scientific methods when it comes to gender determination, which often costs more, but has a higher rate of success. Whatever method a couple chooses to try to sway the gender of the baby they are conceiving, couples should keep in mind that there is no guaranteed method of gender determination, and couples should be happy and thankful for any baby they are able to conceive.

Keep these things in mind, and best of luck conceiving the baby boy, or baby girl, of your dreams!