You are thinking about conceiving! That is a great step and you are also already aware that you need to take some steps in order to make that happen, such as going to the doctor, charting your cycles as well as kicking some bad habits like smoking, drinking and cutting down your sugar and caffeine intake.

You also know that you have to modify your diet, which means you will need to see a nutritionist in order to do that (or research online for a good fertility diet)! You certainly want to make sure you are eating the right foods in order to boost your chances of conceiving.

You may also be aware of the fact that you must take folic acid at least 3 months before conceiving because that not only helps your chances of having a good conception, but increases the odds of you having a healthy pregnancy, and reduces the risk of your unborn baby developing neural tube defects as well.

However, you are not only wanting to conceive one child. You want to get pregnant with twins.

And you are definitely not alone because plenty of other couples want the same thing for various reasons.

One reason that a couple may desire to have twins is that they may only want 2 kids and want to go through one pregnancy, and get it over and done with all at once. They realize that it is not easy raising young twins at the same time, but it becomes easier as they get older. As a result, they can do things like travel with older twins sooner than doing those things with children that have any significant age gap between them.

Another reason that a couple may want to have twins is that they love the idea of having a large family. Perhaps they come from large families themselves and want to have one of their own. Having at least one set of twins will most definitely help them achieve that goal.

Those are the most common reasons why couples want to have twins. If they can financially handle having twins, then wonderful. There are different types of twins. Most people understand the difference between fraternal and identical twins, but some do not.

Therefore, identical twins occur as a random event, and there is no way to help increase the chances of having identical twins, nor is it hereditary.

No fertility drugs, no fertility treatments, and no genetics will play into this. It just happens out of nowhere at times for unknown reasons.

You can say they are just ordinary siblings that were conceived at the same time instead of being conceived years apart.

With identical twins, there are complications that can happen, especially if they are sharing the same placenta which can involve one twin receiving more from the placenta than the other, which causes them to differ in size and can be fatal to them if it is not treated. That condition is called Twin to Twin Transfusion Syndrome. And if identical twins are sharing the same sac as well, there is a risk of the cords being tangled together which also can be fatal.

That said, when it comes to carrying fraternal twins, those risks are not anything to worry about. However, you still have to be aware that carrying twins, whether they are fraternal or identical are not risk-free pregnancies. There will be more about that discussed later on.

Let’s now focus on how you can increase your chances of having fraternal twins.

Did you know if you wait until you are 35 to conceive, you have a greater chance of having twins? There are risks of delaying to have kids because more complications can arise the older you become while trying to get pregnant. And of course, waiting to get pregnant older, it’s harder to get pregnant in the first place!

But the reason the odds of having twins is higher as you age is because  the closer you are heading towards menopause, the greater the chance that two or more eggs will be released in one cycle. Two eggs equals the possibility of two embryos created, which equals possible fraternal twins!

TIP #1: Your chances of naturally conceiving twins rise the older you get.

Look at Your Genes

Do you have a parent that is a twin, or do you have aunts or uncles who are twins? Are you a twin yourself? Do you have a sibling that had twins? Do you have close cousins that have twins? If there are twins in the family, that alone can increase your odds of having twins as well.

Did you know the hereditary part of having twins is all about whether you are more likely to release multiple eggs per cycle?

Yams are an excellent fertility food to incorporate in your diet because it helps with balancing hormones and egg production. However, if you really want to conceive twins, eat more yams. Have yams for lunch and dinner at least 5 nights a week.

The Yoruba tribe in Nigeria subsists on yams as their main food source. And their twin rate is four times higher than the rest of the world. Coincidence? Most think not. And what can it hurt to eat more yams?

TIP #3: Eat more yams like the Yoruba tribe in Nigeria who have a twinning rate greater than anywhere else in the world.

Even though there is not a lot of evidence supporting that full-fat dairy will help you release more than one egg per cycle, it does help boost your fertility so it is worth a shot of including full-fat dairy into your diet.

The reason being are the hormones given to the cows who produce the milk, and these hormones are then passed onto the woman via the dairy products she consumes. The hormones increase her chance, again, of releasing two or more eggs in a single cycle. Which equals, you guessed it, twins! But to increase your odds more, enjoy some yams and have a cup of full-fat Greek yogurt after.

You certainly want to be careful when it comes to your weight and conception. Ideally, a woman who wants to conceive should have a BMI of anywhere between 18 to 25. However, you can safely get pregnant if your BMI is from 25 to 30 and you are slightly overweight, but don’t go past 30 because that is heading towards the obese category.

It has been shown that a little bit of extra fat can help cause the hormone levels to release more than one egg at the same time.

This is especially so while you are eating fertility foods such as yams and full-fat dairy foods. However, if you are closer to having a BMI of 30 and you are trying to conceive, you will need to be very careful with your pregnancy weight gain.

Being on the heavier side can cause you to be more at risk for experiencing some pregnancy complications, and if you are carrying twins, the risks become even greater, so keep that in mind too.

TIP #5: Carrying a little extra fat can cause you to conceive twins naturally.

During the first few cycles after a woman goes off of the pill, the hormonal levels are readjusting which means you may either not be ovulating or will ovulate twice at the same time during the same cycle! That being said, give it a try. While your hormones are out of whack, it may be just the ticket to twins!

TIP #6: Try conceiving right after stopping the Pill, as you have a higher chance of conceiving twins.

Get Pregnant While On The Pill

That sounds like a crazy and counterintuitive idea. However if you are on the Pill, and (a) you forget to take the pill at the set time for you to take it or (b) if you go on medication that can cancel out the effects, you can then purposely stop taking the pill in the middle of your cycle. You then have a good chance of releasing more than one egg because your hormones are readjusting. Sounds crazy, but worth a shot!

TIP #7: Try getting pregnant while on the Pill and stopping mid-cycle, when your hormones are still re-adjusting.

Have Your Man Eat More Oysters

While you are eating more yams and having that full-fat dairy as well, and not losing too much weight,  your man has to help you out as well in order to help achieve this goal.

Therefore, he must be eating oysters or anything that is rich in zinc because that really helps boost sperm quality and the count as well! And if you have two eggs to fertilize, he needs to be ready with some strong swimmers!

Also have him take supplements with zinc and other vitamins that can help boost his fertility like Vitamin C. Give him bread, cereal, green leafy vegetables, wheat germ and seeds as well because those foods are rich in zinc too!

Firstly, whatever miserable symptoms that you will experience in the first trimester such as moodiness, fatigue, and nausea will be double if you are having twins. That means, you will have a very hard time staying awake, and you have an increased chance of having hyperemesis gravidarum while having twins, which is excessive nausea and vomiting that require hospitalization.

Of course, not all twin pregnancies will be different in that regard from singleton pregnancies. Some women who are carrying twins may only have a little bit of nausea and fatigue, but feel great despite that. The odds however of dealing with that are increased.

There is also an increased chance of developing gestational diabetes because of having to put on more weight to support a twin pregnancy. The risk is even higher if you are already overweight. Keep that in mind, and if you do end up developing this complication, you will need to take extra care of yourself which means to not give into any cravings you have.

There is also an increased chance of developing pre-eclampsia which means your blood pressure could get out of control and stress your kidneys and liver, and you could end up having seizures. That usually happens later on in the pregnancy but if that does happen, a premature delivery is the only way to treat it. Especially if blood pressure medication does not help much. 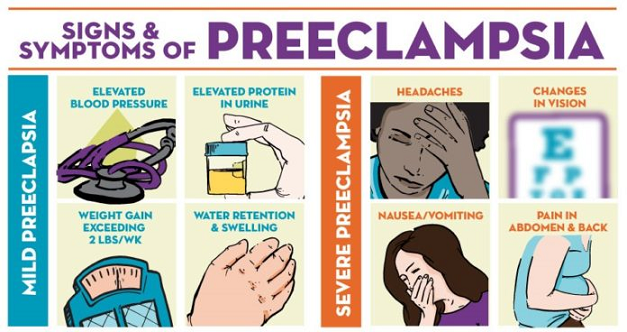 Twins also have a higher chance of being premature, and there is a misconception that they always have to be delivered no later than 38 weeks.

This is not true at all. Twins can be carried straight to 40 weeks.

The only caveat is that yes, they are heavier and weigh on your thinning cervix. So place yourself on modified bedrest, stay off your feet – and eat LOTS of protein to ensure full term delivery.

However, keep in mind that you are not immune to developing these risks if you carry twins. And even if you do your best to care for yourself and your unborn twins, problems can still pop up which would be no fault of your own.

Twins are a double blessing. There is nothing more wonderful than two little beings growing up together at the same time. Our twin blessings to you as you set off on your journey.